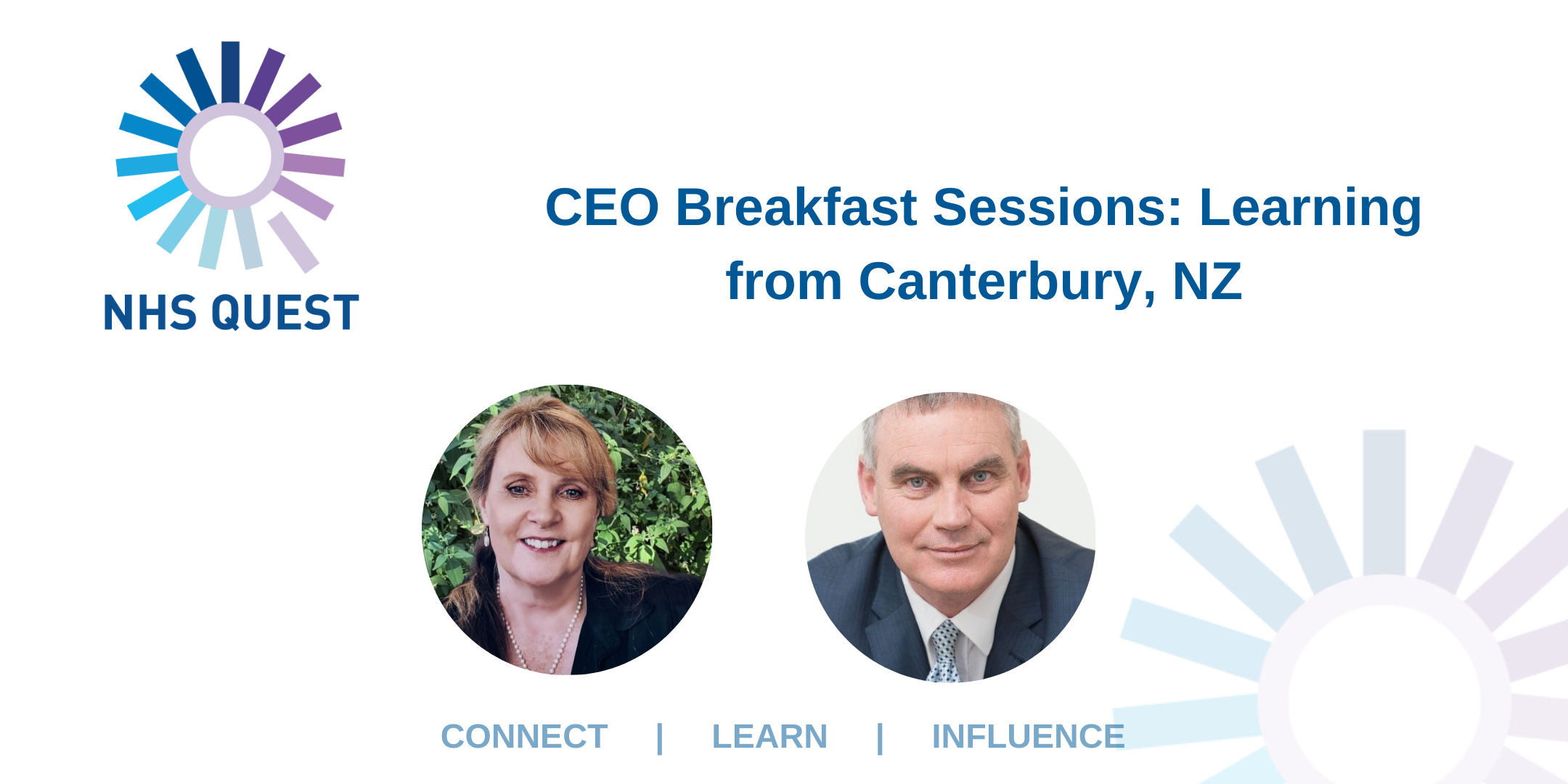 Chief Executives from across the NHS Quest network came together for our Breakfast Session on Wednesday 16 March 2022 to learn from the healthcare system in Canterbury, New Zealand.

We were joined by David Meates (former Chief Executive, Canterbury & District Health Board), Carolyn Gullery (former Executive Director), and Justin Kennington (Lightfoot Solutions), who shared their unique journey towards a truly integrate system of health and care, how they lead change through crisis and recovery, and explored what we could learn in the UK.

How can a healthcare system not only survive, but thrive after a disaster?

On Tuesday 22 February 2011 at 12.51pm Canterbury was struck by its second major earthquake in recent history. The devastation was instant, and Canterbury became ‘a city changed forever’ with 182 people dying in the first 24 hours, 6,659 injured, collapsed buildings and loss of power across the city.

The healthcare system was hit hard by the disaster; 12,000 hospital rooms were damaged, with 105 acute inpatient beds and 659 long-term care beds lost. 12 Pharmacies and one General Practice ceased to exist, while 700 staff were displaced and required to work in unsuitable conditions.

In the wake of the earthquake Carolyn recalled how “the health system should have imploded – but it didn’t”. A series of 6-week planning and implementation cycles were enacted to stabilise the system in the immediate aftermath; in 2 weeks a recovery plan was put in to place to withstand the coming winter. Recovery for Canterbury meant looking to the future, becoming what the healthcare aimed to be, not to recover to its pre-earthquake state.

A major factor of the quick mobilisation was the work around creating an integrated care system that was already in progress at the time – elective surgery targets were back on track just a year after the disaster. Canterbury is a system built on trust and collaborative relationships, where the connectivity of all people was key, was coming into place. 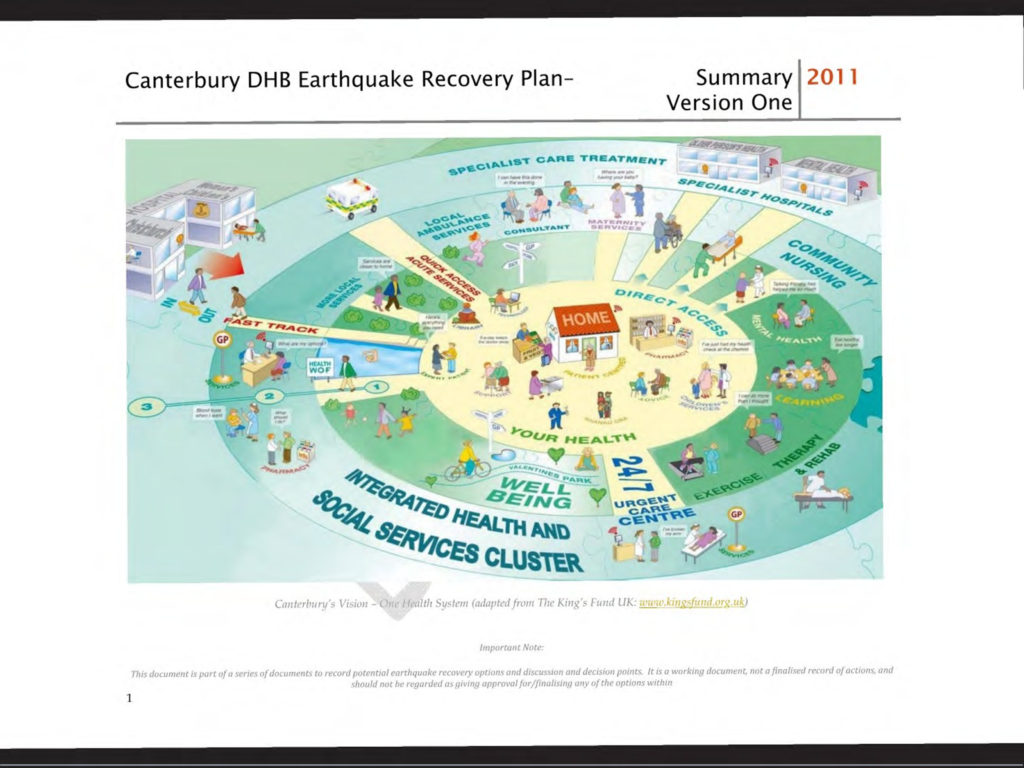 The action plan originally intended for 2020 accelerated and became a reality by 2012. Solutions were found within the primary and community sector, with a shift in the system focusing on how the community could stay well and healthy in their own homes; this could only be achieved with a shared vision that everybody could understand and articulate. GPs acted as a point of continuity, and digital systems were ramped up to solidify this. It was also important to make the service efficient.

“Not wasting patients time became a really important and unifying factor across the system.”

The implementation of integrated care had a significant long-term impact as well as recovering from the immediate aftermath. The integrated care system reduced the rate of those needing long term care with an aging population: there was a 50% increase in the population of over 65’s in the past 11 years, yet a 30% decrease in occupied beds per capita.

What can the UK health system learn from the response to the Canterbury Earthquake in our recovery from Covid-19?

“When we think about recovery, the wellness of staff is a fundamental part of the journey going forward.”

In Canterbury there were both immediate and long-term effects on the workforce. After 3 years behavioural issues amongst staff became more apparent and people were ‘hit hard’ by the reverberations the disaster had. It is key that this learning is also applied to the pandemic, so that we can plan for the future of the workforce, not just the ‘here and now’.

The power of data

Data was also integral in the recovery as “a single source of truth” for everyone in the system, allowing transformation at scale, giving visible results, and restoring public trust in the system. The approach to data was termed ‘signals from noise’ and became a tool to predict future outcomes for the population, as well as helping teams to become agile and reactive in their way of working. Ensuring the use of the correct data sets and live data was integral in linking primary care with secondary care and enabling clinicians to get on board with the changes taking place. 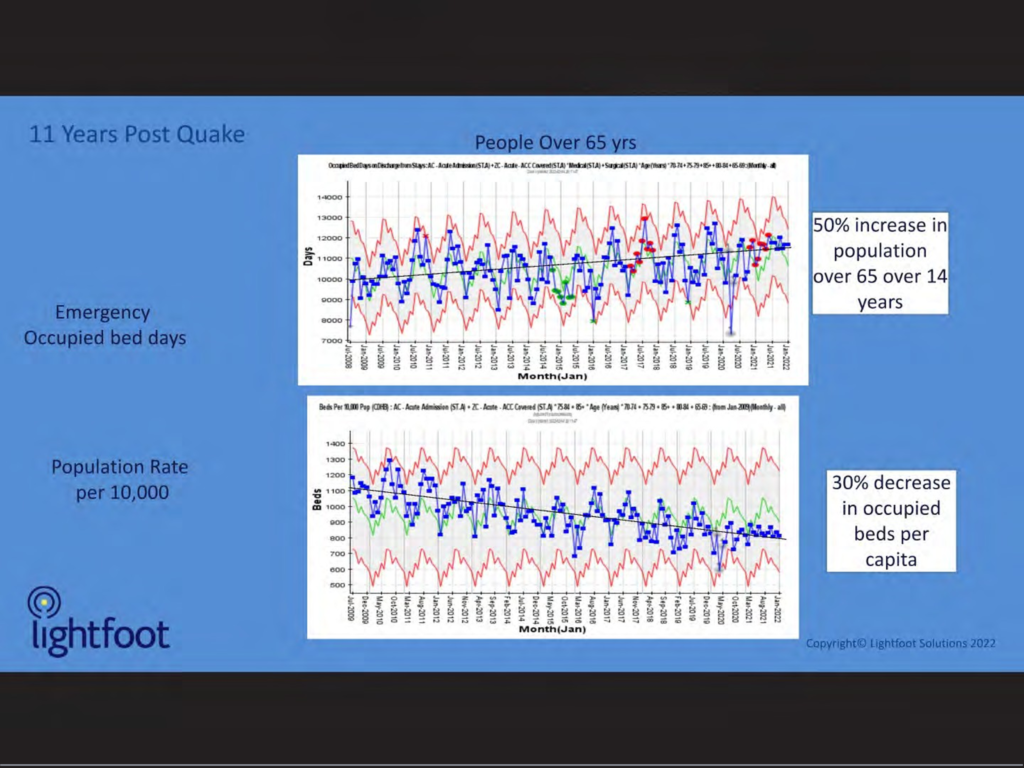 Data was also a powerful tool in resource allocation. Leaders stopped telling the system what they wanted people to do, and shifted to agreeing together what they wanted to see, allocating resource to that, and letting providers chose how to do it. This was a 4 year journey, with no new money.

Closing the gap on inequalities

The maturing integrated care system reduced the mortality gap between Māori and non-Māori people from 7 years to 2 years. This was achieved by first looking at the data to show the evidence and design the outcome, then mobilising a person-centred response.

Shifting the narrative towards wellness

Creating a customised response to the trauma of children helped to move away from the idea of an ‘illness orientation’ to a ‘wellness orientation’. Instead of talking about mental health, care was focused on wellbeing and resilience through school-based programmes.

What is next for NHS Quest?

The discussion that took place around the use of integrated care in an emergency was extremely insightful, sparking a variety of valuable conversations between the Chief Executives.

Looking forward, the NHS Quest network agreed to continue the conversation and learning at the Annual Study Tour in September where examples will be explored be looked at in more detail to inform recovery around Covid-19.